Summertime and the living is delicious

Summer has rolled into the San Joaquin Valley. Days are over 100 degrees. Crops are coming into the market on a daily basis. This week the berries and corn arrived. There are more farmer’s markets than you can shake a stick at in the general vicinity of Fresno. Every shopping center seems to be getting in on the action. All of this is good. Good for the populace, and good for our local growers.

Knowing it was going to be hot yesterday, my retried teacher friends (the Ladies Who Lunch) got an early start to head south about 30 minutes to a small farm town, Kingsburg, where the Berry Lady has established herself with high quality blackberries, blueberries, and boysenberries. I had learned about her last year at a neighboring city’s farmers market where I bought some of the last of blackberries for the season. I made a special note to get out there earlier this year so as to get more of these fantastic organic berries. Due to an earlier hot spell, the crop is about two weeks ahead of most years. We were in berry heaven by the time we arrived: 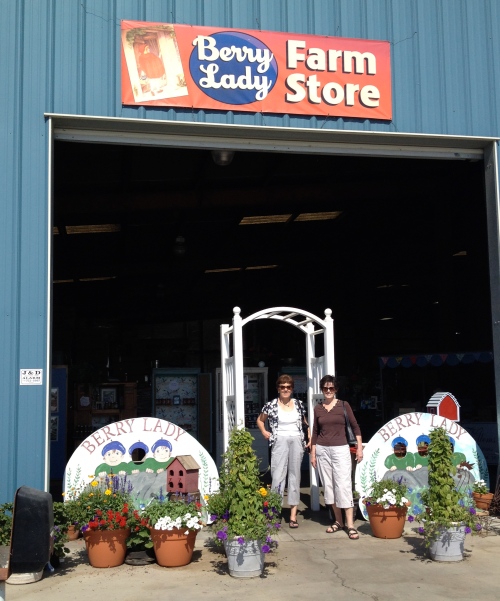 One of our group could not come as she is helping her daughter move into a new house but she had sent money along with us to get a case of blackberries for her as she had been listening to Gladys and me swoon over last year’s berries that we were able to buy. The berries are picked daily, coming into the packing shed in big tubs. They were bringing in blueberries while we stood and chatted with the Berry Lady and made our purchases. 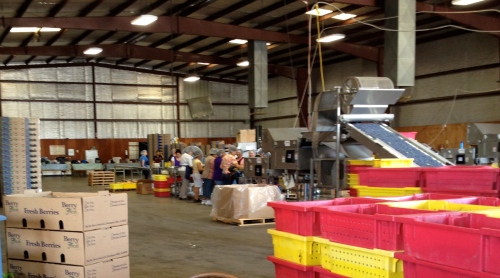 Helen also bought some pickle relish from the store of goodies. Her husband makes his own pickles so she wanted to give him an idea for relish. This jar was

made with zucchini squash of which they have plenty in their own garden. We looked, too, at the jellies and jams but decided we would either make our own or come back another time to buy those. 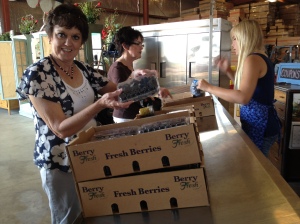 Just as we were packing up our purchases (a crate of blackberries for each of us and blueberries also for Gladys and me), another customer arrived to say that the corn stand was open on the corner. I had seen this as we made our turn towards the Berry Lady’s operation and wondered if they had yellow corn. White corn has been in the market for a week or so, but I prefer yellow. The customer was saying it’s the best corn around so that cinched it for me. We were stopping. The stand is run by the farmer’s darling young sons. Ten ears for $5, and yes, it was yellow corn. Terry and I had corn on the cob for lunch and berry pie for dessert. It’s summer in the valley, and the eating is good. 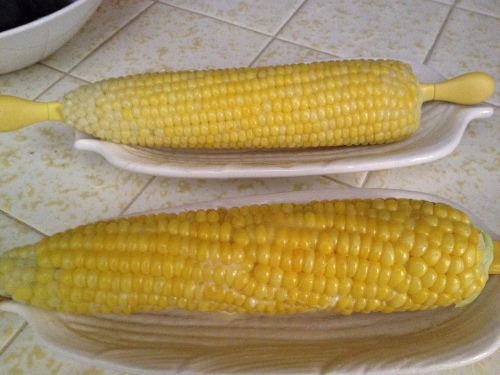 This entry was posted in The world and my place in it and tagged blackberries, blueberries, boysenberries, corn, Farmer's markets, pickle relish, pickles, San Joaquin Valley agriculture, The Berry Lady, The Ladies Who Lunch. Bookmark the permalink.

5 responses to “Summertime and the living is delicious”

This site uses Akismet to reduce spam. Learn how your comment data is processed.