At the salt marsh

The little town of Alviso was our destination on Saturday. We went there about two years ago with our granddaughter and kept saying we had to return, but usually we have to get somewhere when we passed the turnoff so we kept pushing it off. Saturday we made the turnoff.

Stopping at a restaurant I found on Yelp, Rosita’s Cafe, was the perfect place for lunch. I ordered carnitas burrito and found the best carnitas I have ever had. We asked for an order of chips and the green salsa to take to our son-in-law who is a fan of such food. We definitely want to come back here to eat again.

Alviso is an historic town on San Francisco Bay where once fishing boats brought their hauls. As the town sank into the bay, things changed. The canneries closed, people moved. The salt, though, kept coming. The marshes continued to fill the shoreline.

A park with trails through the marsh is here now. These doorways are built along the edges, leading one onto trails. There is a train track on the east side of this salt marsh. As we walked along, the train passed once, and then returned. As I captured this photo

Terry snapped this one of me. It was very windy that day and his hat kept trying to blow away. I took it and pulled it down tightly on my head not realizing he was going to make a permanent record. 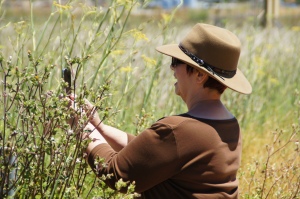 Posted in The world and my place in it

Our tiny granddaughter loves to watch videos, or as she calls them, “bideos,” with the help of her grandfather. Terry and Leeya sit on the couch, with gmpa in charge of the mouse and computer, and granddaughter giving directions as to which “bideo” is next. She watches a lot of Sesame Street, Barney, and Veggie Tales stories. One of her favorite (or perhaps it’s my husband’s favorite) stories is about a group of pirates who sit around and don’t do anything. It’s pretty zany and the message is, go out and do something. I used this strategy this past week when we took care of Leeya while her parents were off on their own adventure with kayaks and hiking.

For a couple of months now I had wanted to investigate an old town down near San Jose called Alviso. I had seen some photos on flickr and wanted to do my own exploring, so Tuesday was a perfect day for that. It was warm and sunny, we all felt good, and to get Leeya excited about going out, I told her we weren’t going to be pirates who sit around and do nothing. She was agreeable.

If you’ve been to the Silicon Valley in the last few years, you know it is heavily developed with lots of tech industry and shopping centers and homes. There is little vacant land around although this was once a great farming area. Alviso stands in stark contrast. Originally a shipping port for mercury mined nearby and then gold during the 49er era, Alviso was once a lively community of stores, bars, hotels and homes. In 1906 it had one of the largest fish canneries in the world, and some of those buildings still remain. But not much else does. The bay receded and the salt marshes increased. In 1968 it was annexed to San Jose, yet it stands quietly secluded from all of the hubbub of that big city. As we wandered out on the salt marshes, I almost forgot just how close we were to a civilization of a million people.

We watched birds and bugs, picked wild mustard, and jogged and climbed. Leeya found a water faucet by the bathrooms that delighted her as well as soaked her. Fortunately I was smart enough to pack a spare set of clothes; not smart enough to pack a spare pair of shoes. We ate our picnic lunch in the hatch of the Subaru and watched as others who probably work close by came with their take-out lunches, a respite from the busy day.

Terry took lots of pictures with his new camera, the purchase of which had been Monday’s adventure. Here we are on a trail: 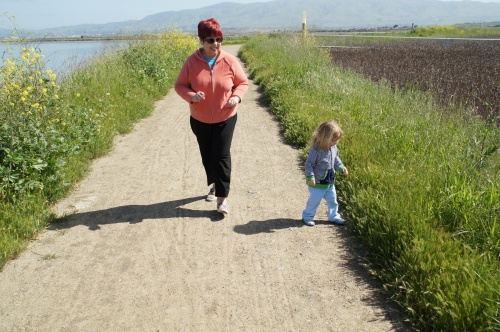 After lunch, and a change of clothes, we headed back through the little community of Alviso, stopping for a few pictures. I really want to return some day and investigate a little more thoroughly.

Posted in The world and my place in it